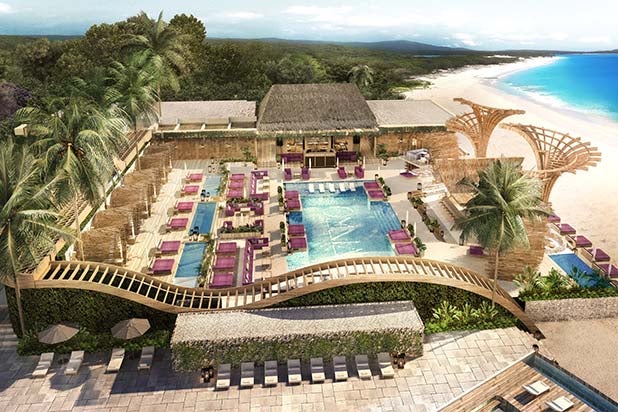 DNCE’s “Cake by the Ocean” will take on new meaning later this month as Steve Aoki joins the Hakkasan group in saying “Vamos a la playa!” Omnia, the Las Vegas megaclub inside Caesar’s Palace, is opening a year-round beachside dayclub in Cabo San Lucas, with the cake-tossing Dim Mak label chief bringing a few A-list producers to the opening weekend fiestas. While Tiësto, Martin Garrix, Kaskade, Illenium and Armin van Buuren are among the names that have made Omnia a temple of EDM in Vegas, the new outpost south of the border will be less bombastic by servicing daylife and dining, not the post-midnight peak hours. Also Read: 9 Things You Didn't See on TV From the New England Patriots v Oakland Raiders in Mexico City This venue and three others opening simultaneously at the Vidanta Los Cabos hotel will play in the key of “afternoon siesta” … that is, after the opening days. A rendering of the new Omnia Dayclub. (Hakkasan Group) Calvin Harris, Zedd and Aoki will each play a headlining set to christen the new venues during a splashy grand opening weekend on Feb. 23-25. Also Read: Coachella 2018 Lineup: 15 Surprises and Snubs “Our aim was to offer a day-to-night experience that would be world-class in its design, content and service,” Nick McCabe, CEO of Hakkasan Group, told The Party Report. “Los Cabos is a wonderful destination and we hope that these exciting new openings will give people yet another reason to visit.” Buddies Zedd and Aoki at a private performance in L.A. (Neil Favila) Omnia Dayclub will anchor an entertainment district at Vidanta Los Cabos, a property and hospitality partnership between Hakkasan Group (Omnia, Jewel, Hakkasan, Wet Republic) and Grupo Vidanta (which holds the pole position in developing luxury tourism across Mexico and Central America). The district  will include the fish-focused Herringbone (a boozy brunch patio favorite at Aria in Vegas and in Santa Monica, California) and a south-of-the-border opening for SHOREbar (the “home away from home” that is one of L.A.’s only sleek cocktail haunts at the beach). h.wood group’s relationship with Hakkasan, which includes the “Heart of Omnia” in Vegas, expands here with a new iteration of the Shorebar (Rendering) Hakkasan Group is also raising the degree of difficulty by launching a new Mexican concept — in Mexico. Casa Calavera has a “dia de los muertos” bassline running through its beachside dining. Also Read: Beyond Wonderland 2018 Lineup: Alesso, Tiësto and KSHMR Lead Pack of 60 Performances   Nobody does hard invites for events anymore, except Hakkasan (Mikey Glazer) Though Omnia is starting off with a bang, it’s not going to be a monstrous confetti cannon experience nor the cookie-cutter champagne sparkler template that peer properties like Nikki’s Beach have exported to every corner of the globe. Insiders tell The Party Report that they’re looking to import the Hakkasan DNA into a daylife concept. From the looks of the renderings, it’s an intimate footprint. As a luxury play, this will also narrow the demographic crossover with Cabo’s neon-hued nightlife that caters to college-aged and young adult “bender-tourists.” For one, the Vidanta is a private, members-only property comprised of real estate owners. A rendering of mexican concept Casa Calavera. (Rendering) “It is incredibly exciting to be partnering with the leading name in lifestyle luxury to transform Los Cabos into the ultimate entertainment destination,” Iván Chávez, the executive vice president of Grupo Vidanta, told the Party Report. “Grupo Vidanta has long invested in establishing Mexico as a premier international tourist destination, and our new entertainment district exemplifies that commitment.” Also Read: Surprise: Mexico-Based 'Coco' Is More Popular in China Than the U.S. Unlike the Hakkasan’s Vegas pool scene at Wet Republic that takes a hiatus during the winter months, the Cabo entertainment district will be open year-round. Also, in a first for the devoutly code-compliant Hakkasan group, the venues will be 18-and-up  — something that is a no-go in Nevada. “We are thrilled to be partnering with Grupo Vidanta to launch a new standard for entertainment experiences in Mexico,” McCabe added. The entertainment district is at the Vidanta Los Cabos. (Rendering) Some of the familiar faces from Hakkasan’s VIP Services and management teams will be on the ground in Cabo as the venues ramp up. Also Read: HGTV Orders 96 More Episodes of Its Beach-Lifestyle Shows, Including 'Beachfront Bargain Hunt' A view of the new Herringbone, which was formerly in the Mondrian in West Hollywood and is usually mobbed poolside at the Aria in Las Vegas. (Rendering) This new international partnership is notable in the continuing story of Vegas’ revenue reliance on nightlife and hospitality revenue over casino gaming. While Las Vegas casinos have traditionally been a net importer of the most successful restaurant concepts from around the country, now homegrown Vegas winners are going the other way. Brands like Tao Group’s LAVO that opened in a hotel in Singapore over the New Year’s holiday and this portfolio from Hakkasan are setting a new trend: exporting Vegas DNA to other vacation markets. Coinciding with Insomniac’s EDC Mexico festival in Mexico City, Cabo’s airport should be on the lookout for any private jets heading 735 miles north west to deliver this opening weekend lineup: Friday, Feb. 23 Steve Aoki (nighttime performance) Saturday, Feb. 24 ZEDD (daytime performance) Saturday, Feb. 24 Calvin Harris (nighttime performance) An early peek inside Omnia Los Cabos and some limited availability passes to the private opening weekend festivities are available here. Related stories from TheWrap:Art Basel Party Report: Drake, 50 Cent and Ricky Martin Rock South Beach (Photos)Oscars 2018 Party Report: 'The Final Year', 'Call Me by Your Name' and Brooklynn Prince on the Scene (Photos)Super Bowl LII: The Scene From MinneapolisSuper Bowl LII: Justin Timberlake, Julian Edelman, Jamie Foxx Party in Snowy Minneapolis (Photos)