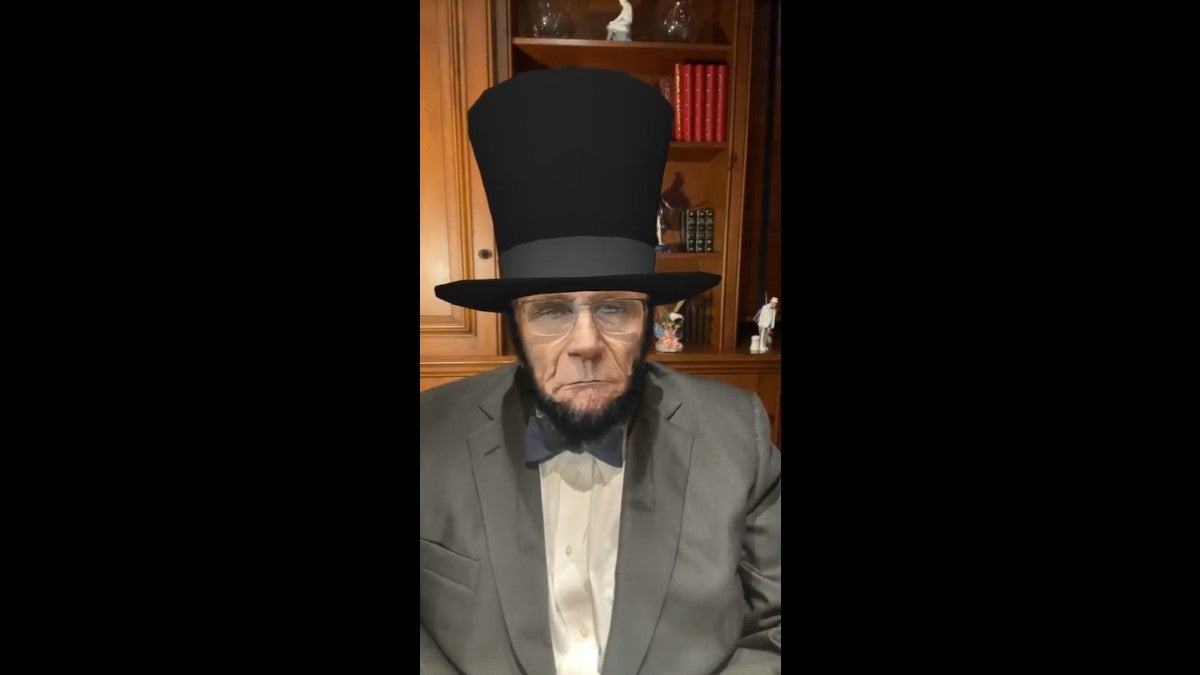 What the Hell Is Up With Rudy Giuliani’s Weird Impression of Abe Lincoln? (Video)

Look, we all know Rudy Giuliani has had a rough go of it since he committed to abjectly humiliating himself on behalf of Donald Trump. But on Tuesday the former mayor of New York — and current subject of a federal criminal investigation — escalated things with something that I’ll argue brings the concept of ‘cringe’ into its baroque period. In a video he recorded in support Glenn Youngkin, the right wing Republican currently running against Democrat Terry McAuliffe in the Virginia Governor’s race, Rudy uses a cheap video filter that superimposes Abraham Lincoln’s chin beard and a top hat to his head. Thus giving him the excuse he needed to cosplay the 16th President of the United States urging Virginians not to vote for McAuliffe. But honestly, you need to see it for yourself. Look, I warned you, OK: #mcauliffeisbad just listen to Abe pic.twitter.com/tQbS9EVJ3Q— Rudy W. Giuliani (@RudyGiuliani) October 19, 2021 In case you were watching that through your fingers and didn’t pay attention, what he says in 35-second clip is: “Virginia! Vote against the man who dishonored our past by selling my bedroom, hundreds and hundreds of times, to scoundrels, in a pay for play scheme. In my time, we had a name for men who sold bedrooms for one night. In your time, the name is Terry McCauliffe. End the Clinton sleeeeaze, once and for all!” Ok so to catch-up those kids who have no idea what he’s talking about, during the 1996 presidential election, a journalist named Margaret Ebrahim discovered that during Bill Clinton’s first term, a total of 821 guests at the white house slept in the Lincoln Bedroom. And it turned out many of those guests were supporters, famous people, and friends of the Clintons. Apparently, the whole thing started after the 1994 mid-terms, which saw Democrats lose control of both houses of congress in what is still understood to be a major, historical shift in American politics. In a memo that later became public, McAuliffe, then the Democrat National Committee’s Finance Chair, proposed Clinton make an effort to keep in touch with big donors who might be demoralized by those losses, in order to keep them engaged for the 1996 reelection effort. Clinton then started ramping up invites. This happened during the period when the Clinton administration was already swarmed by the hodgepodge of (mostly, but not entirely baseless) scandals that would culminate in his impeachment. So, for a few months in 1996 and 1997, it was treated like a big deal. But it turned out there’s no evidence McCauliffe did anything other than make that suggestion in a memo that Clinton used as inspiration. Further, Clinton said the whole thing was his idea. But more importantly, sleazy or not, it isn’t at all unusual for presidents to have donors and other supporters as overnight guests, including people who criticized Clinton only to do the exact same thing. And there was absolutely nothing illegal about it. Republicans ever since have talked about it as if it was a scandal on par with Watergate, even though most people have long since forgotten about it and as you can see, it’s difficult to clearly explain what the hell people were supposed to be mad about. But, it always comes up whenever McAuliffe runs for political office. Cue Rudy. But setting aside the substance, such as it is, of the video, the fact remains that Rudy’s wheezy, exhausted attempt to evoke Lincoln is just horrible. He’s not even making an effort to try and sound like Honest Abe, or at least use words and speech Lincoln might have. He’s just doing a “what if Lincoln was from Brooklyn and also just took a box of Benadryl” kind of thing. And come on, he doesn’t even look like Abe Lincoln! It’s clearly Cornelius from “PLanet of the Apes”: Also, Rudy, always film in landscape, never portrait. Come on. But, we’ll give it this: This video is another perfect combination of weird, off-putting and kind of incorrect on multiple levels that we’ve come to expect from the forgot-to-edit-out-racism, hands-in-pants, dye failure king. But at least he didn’t record this hilarious thing at the Four Seasons. Related stories from TheWrap:Editorial Board Calls for Giuliani's National Disbarment: We've 'Had Enough' of His 'Fake News'Rudy Giuliani Joins Cameo, Asks for Same Money as Sarah PalinRudy Giuliani: If I Go to Jail, Those Who Put Me There 'Will Suffer the Consequence in Heaven' (Video)