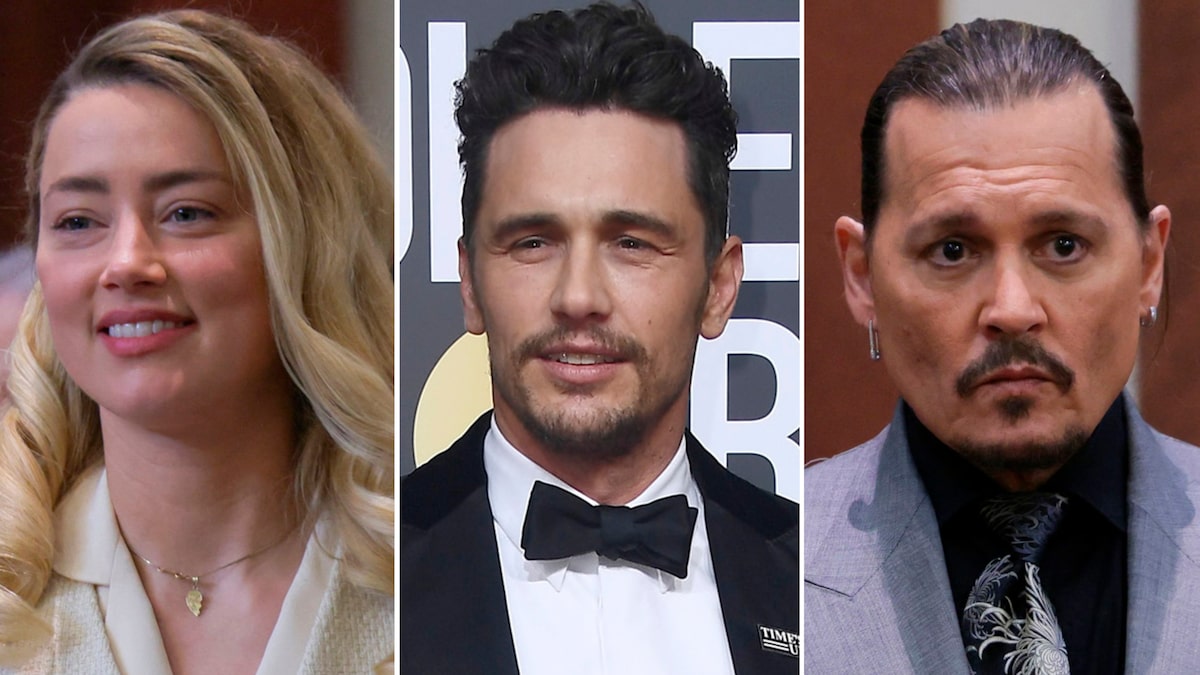 James Franco finally made his appearance at the Johnny Depp and Amber Heard trial… but not on the witness stand. Franco was featured in security cam footage that showed the actor getting cozy with Amber on a ride up an elevator to Depp and Heard’s penthouse. The video was taken on May 22, 2016… the day before she filed for divorce from Johnny, and a few days before she filed for a restraining order against him. During cross-examination on Tuesday, Depp’s attorney Camille Vasquez confronted Heard about the surveillance video. Vasquez asked, “That’s you and Mr. Franco on May 22, 2016, right Ms. Heard?” Amber confirmed, “That’s correct.” Heard noted that she “attempted” to change the locks to the penthouse one day before Franco’s visit. In response, Vasquez asked, “That’s why you felt comfortable having James Franco over the evening of May 22, 2016?” Heard commented, “I do not know when James came over.” Vasquez told Heard, “And it’s past 11 p.m. at night… You knew Mr. Depp was out of town the week of May 21, 2016.” Heard insisted that she didn’t know Depp’s schedule. Johnny was reportedly jealous of James and Amber, who had starred together in the movies “The Adderall Diaries” and “Pineapple Express.” Amber, however, testified that there was a simple reason why she and James got together the night before she filed for divorce. Heard said, “He was my friend and he lived next door, quite literally next door, and I had frankly exhausted my support network with my usual friends and was happy to welcome as much friendship at that time as I could possibly get.” Earlier this month, Amber testified that she had fought with Johnny about James in the past. During that testimony, she shared her side of the story about what led to the infamous fight between herself and Depp on a private plane in 2014 as they were flying to Los Angeles from Boston. At the time of the incident, Heard was shooting “The Adderall Diaries” with Franco, who she said Depp “hated.” She told the courtroom, “It was a nightmare. [Johnny] was mad at me for taking the job with James Franco. He hated, hated James Franco and was already accusing me of secretly having a thing with him in my past." The two had allegedly been arguing about Franco the night before. She said, “He gets on the plane and I just knew every cell of my body something was wrong. I already know that he's drunk, I already know he's using, he reeks of weed and alcohol. His breath smelled so bad. I could anticipate that there was a no-win situation here. There's no me talking myself out of this or talking him down." Heard testified that Depp confronted her about Franco and their intimate scenes. She said, “[Johnny] was saying really disgusting things about my body, how I liked it. He called me a go-getter, he called me a slut… I struggle to be able to tell you how embarrassed I was because he was... asking me if I liked it... Did I ask James to do this and this to me." According to Heard, things escalated in front of his friend. She said, “He starts throwing things at me. Ice cubes, utensils... talking about what an embarrassment I am. He sits down in front of me at one point... and he slaps my face." Heard accused Depp of kicking her as she was getting up, saying, “I feel this boot in my back. He just kicked me in the back. I fell on the floor. No one did anything." Heard testified that she was “just embarrassed that he would do that in front of people.” Heard also explained why she tape-recorded Depp on the plane, saying, “In my experience, when Johnny was that inebriated, he would not remember what was done.” Audio of Depp moaning on the plane is heard. According to Heard, Depp “started howling like an animal” in the plane bathroom. Depp has denied the fight on the plane and her assertion that he was intoxicated. Heard is being sued for $50 million by Depp for defamation. Depp has vehemently denied striking Heard.