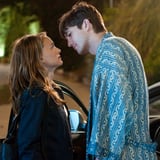 Ashton Kutcher and Natalie Portman are having some important revelations about their rom-com pasts . . . while running on treadmills. This week, Portman joined Kutcher as part of his marathon-training series "Our Future Selves" with Peloton, jogging alongside him as the two discussed how they first met and finally addressed the striking similarities between two iconic films within the romantic comedy multiverse. "I think the first time we really started hanging out is when we shot 'No Strings' together,'" Kutcher said while sounding miraculously well-articulated for someone going full speed on . . .