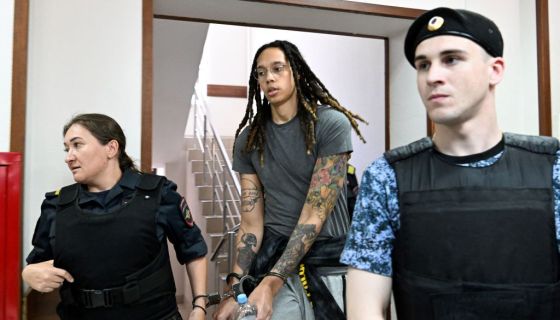 The Biden administration is speaking out on Russia’s ridiculous refusal to release a 6-time WNBA All-Star and Olympic gold medalist. On Tuesday, Jake Sullivan, security adviser for The White House said the POTUS has his “full attention” on Britney Griner. Source: KIRILL KUDRYAVTSEV / Getty This comes after Griner’s wife, Cherelle Griner, made a passionate plea for the President to bring her home.  “There is one person that can go get her, and that’s our president,” said Cherelle Griner. “He has that power. You know, I’m just like, ‘Why are we not using it? Like, urgently, use it!” View this post on Instagram A post shared by 𝐂𝐇𝐄𝐑𝐄𝐋𝐋𝐄 𝐓. 𝐆𝐑𝐈𝐍𝐄𝐑 (@cherelletgriner) As previously reported, Brittney was arrested in Russia 4 months ago and just Monday, a Russian court decided to extend Griner’s detention another 6 months, to Dec.20, The Associated Press reports. The Houston Texas-born athlete will remain in custody throughout the remainder of the trial set to begin this Friday. If convicted, 31-year-old Griner could spend the next 10 years imprisoned on a criminal drug possession charge that she received after being arrested in a Russian airport with a vape cartridge containing traces of cannabis. “It has the fullest attention of the president and every senior member of his national security and diplomatic team, and we are actively working to find a resolution to this case and will continue to do so without rest until we get Brittney safely home,” Sullivan told reporters on AirForce One according to The Hill.  “We just can’t even begin to imagine what the family must be going through, what Brittney must be going through” Sullivan continued. The White House security advisor also stated that both he and Secretary of State Antony Blinken have both “conveyed their sympathy” to Brittney’s wife. When asked how Brittney was doing, Sullivan chose not to go into detail but instead told reporters that “The United States government is actively engaged with trying to solve this case and get Brittney home.” Source: KIRILL KUDRYAVTSEV / Getty   Fans and supporters of the star believe that Brittney is being held wrongly and unjustly and human rights activists around the globe have been advocating for the immediate release of the Women’s National Basketball Association superstar to no avail.