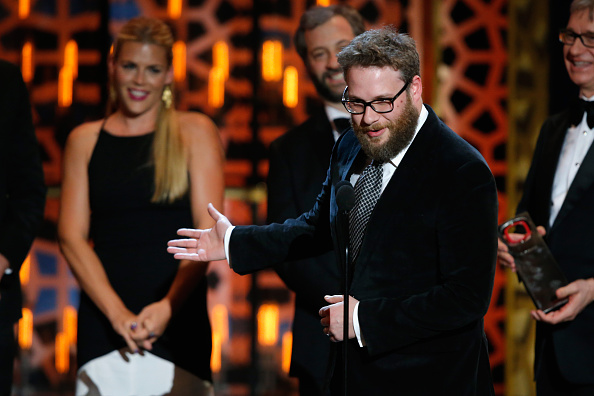 Earlier this week, The Daily Beast interviewed Busy Phillips who is out promoting her new phenomenal Peacock series, Girls5Eva, which is basically a Tina Fey sitcom minus the problematic jokes. (Episode 3 may be my favorite comedy episode of 2021, so far). In any respect, the interviewer also asked some follow-up questions about Phillips' memoir, which included the treatment she received on Freaks and Geeks. In the book, she documented some shitty, abusive behavior from James Franco, although it it worth noting that while she said that she felt very protected with Judd Apatow and Paul Feig on that series, and that she was never pressured to lose weight or dress more provocatively, she did say that the narrative the media spun in the other direction was kind of sh*tty, too. And it was fortunate that the characters that the two of you were playing were not supposed to be these perfect people. Well, sure, Matt, but that's f**ked too! I mean, I am, objectively speaking, very attractive. You know what I mean? ... Literally Linda found an article, a review of Freaks and Geeks, and showed it to me when it was first starting and there was a line like, "This isn't Dawson's Creek or the WB, you won't find any pretty faces here." And that was always the messaging that I was told for years and years, was that I wasn't thin enough and I wasn't traditionally pretty enough ... So that messaging wasn't really coming from within the house on Freaks and Geeks necessarily, but it certainly was always just there and it was understood by anyone who was paying attention. Naturally, however, the interviewer wanted to ask Busy what she thought about Seth Rogen's decision to no longer work with James Franco in the wake of all of his #MeToo allegations, despite the fact that the two were once very good friends. "I have to say, I mean, it's interesting. They were super close and they had a very tight relationship. And so I don't have any information .... I guess I was surprised," Phillips added. "Although, to be honest with you, I haven't spent my days doing deep dives into what it all was. I didn't work with James past age 20, so I can only speak to the horrible behavior I experienced." But then Phillips said something that maybe we've all been thinking these last few years, as Rogen has not only separated himself from Franco, has made some more mature choices as an actor but has done a lot more work on the production side of things, where there's often more money, in addition to growing his pot business and writing a memoir. "I mean, I'm going to say something now, whatever--Seth is married to a very f**king smart woman." If you really want to know why Rogen distanced himself from Franco, I'm with Busy: Her name is Lauren Miller, who I am assuming had no say in Seth's hairstyle here. FYI: I read Rogen's memoir/essays, Yearbook last week, and it's a fun, short read (and Lauren figures into much of it). Source: The Daily Beast