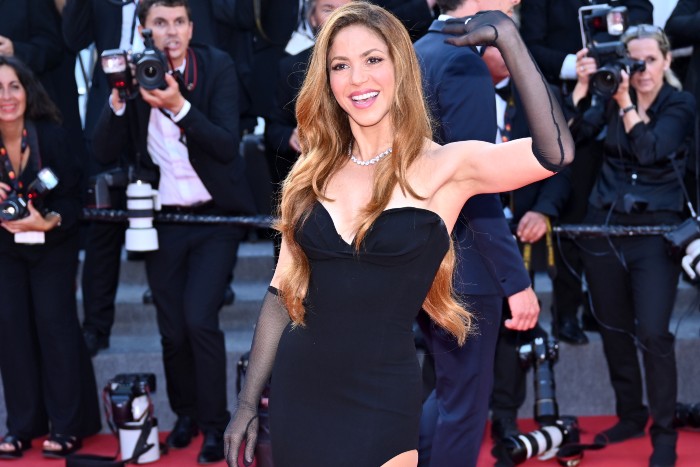 Less than 48 hours after splitting from her husband Gerard Pique, who reportedly cheated on her, Shakira already started following Chris Evans and Henry Cavill on Instagram. And why the hell wouldn't she? Live that life. (Marca) The Daily Mail's report about Kim Kardashian begging to attend the Queen's Jubilee is amateur hour. (Lainey Gossip) Vivica A. Fox slams Jada Pinkett Smith's "self-righteous" plea for Will Smith and Chris Rock's reconciliation. (Dlisted) Brad Pitt thinks Angelina Jolie has gone out of her way to "stall" their divorce, which has surprisingly only been going on for six years. I would've easily said centuries. (Celebitchy) In a small world moment, the writer of Vanity Fair piece below, Mike Hilleary, worked for me during my aggravating time as an FYE store manager where my district manager routinely put the screws to me because she knew I had a pregnant wife (and then baby) at home. I literally wrote The Superficial posts in the backroom to get the f*ck out of that place. Anyway, super proud of Mike, who's been doing yeoman's work as a writer for years, which recently culminated in him spending hours talking to Bryce Dallas Howard about her truly stand-out episodes of The Mandalorian. You guys have seen how hard I am on these Star Wars shows, and yet I feel comfortable saying "Return of the Mandalorian" is proof-positive that a skilled hand can make the franchise sing. For Bryce Dallas Howard, being a director has, more or less, always been a foregone conclusion. That her path led her to 'Star Wars' has changed the galaxy far, far away for the better. https://t.co/BFvbk7186m— VANITY FAIR (@VanityFair) June 3, 2022 From Kayleigh: An Instagram account dedicated to posting "handwritten notes of support for Amber Heard from around the world." (Instagram) A talk with the man responsible for Batman's rock-hard nipples in Batman and Robin? You have my click. (MEL Magazine) From James: McSweeney's always offers quality entertainment, but these excerpt's from Ina Garten's Anarachist Cookbook provide great entertaining tips as well. (McSweeney's) From Claude: I'll admit it; the words "Mormon MomTok" and "soft swinging" had me clicking on the link SO FAST. (The Cut) From Andrew: .@GregAbbott_TX can't get volunteers to do his canvassing. This paid canvasser doesn't support him either. H/T @DrJamesWhit pic.twitter.com/PtXEPwpYQl— thomas rayosun long 🛹 (@ACoupleOkooks) June 3, 2022 What the hell happened to the MTV Movie Awards? (Daily Beast) OK, who was the Arrow cast member that made Colton Haynes quit? Smart money is Stephen Amell, but I remember hearing talk of Katie Cassidy not being the best. (Deadline) In a primo "The Worst Person You Know Just Made A Great Point" moment, I'm actually with Bill Maher on this one. Sonofabitch... (The Wrap) Listening to a podcast interview led AnnaCollier to Philip E. Tetlock and Dan Gardner's book Superforecasting: The Art and Science of Prediction, which looks at the cognitive styles of people who are good predictors. "One important element of the kinds of forecasts Tetlock describes is that they take big, complex questions and distill them into smaller, more readily quantifiable questions." Which podcasts inspire you to learn more? (Cannonball Read 14) Me writing a movie starring Andrew Garfield, @joe_keery and I about three triplets who were raised in different parts of the world but bump into each other at a singing competition. pic.twitter.com/3hANzefHHE— Ben Schwartz (@rejectedjokes) June 2, 2022