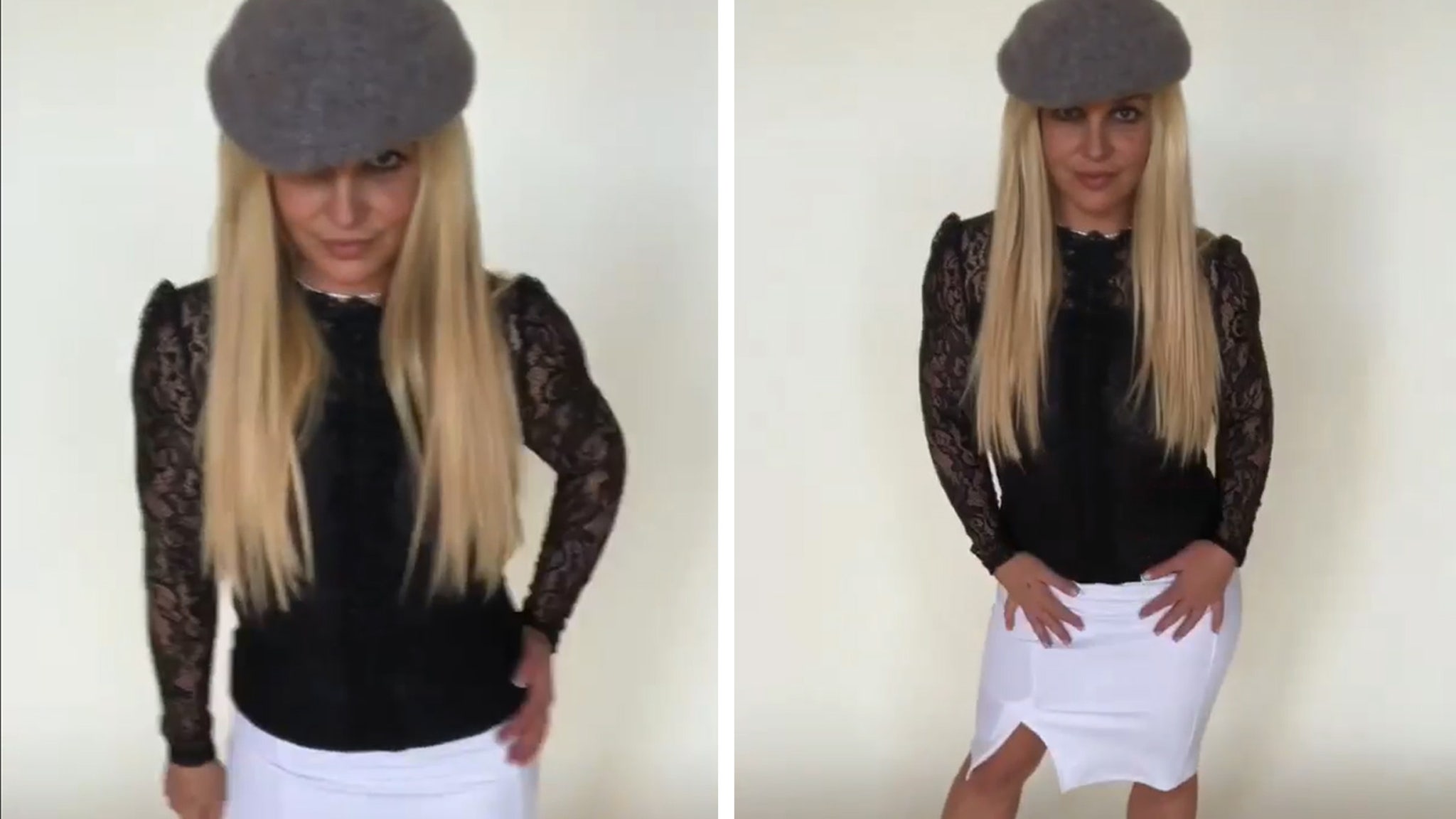 She even dressed up as her too. Britney Spears dropped another reference to ex-boyfriend Justin Timberlake in her latest Instagram post. On Wednesday, the pop star posted a video to Instagram in which she can be seen posing in various clothing combinations to the sound of applause. At one point, Britney, 39, rocks an outfit featuring a black long sleeve lace top, a white skirt and a gray newsboy hat. The singer joked that the cap made her look like "that girl" in JT's music video for "Cry Me a River" -- which starred a Britney lookalike. Timberlake has stated his split from Spears inspired the video. In her post's caption, Britney wrote, "Thoughts while making this video 🤔 … Hmmmm something looks familiar …. The hat 👒 …. wait I look 👀 like that girl in the Justin Timberlake video with that hat in Cry Me A River !!! Oh s--- that's ME !!! I'm Britney Spears ⭐️ ??? I guess I forget that sometimes 🙊😂🤷🏼‍♀️ …" "Oh s--- I look like a doctor in this video too though with the white coat 👩🏼‍⚕️ … maybe I'M THE DOCTOR … I mean who's playing who 😜 ???" she continued, referencing an oversized white blazer she modeled in the clip. "I mean my brother wears that kind of hat … but wait the skirt … I haven't worn a skirt in forever !!!" She added, "Am I Britney Spears ??? Psssss HMMM 🤔 all this time ??? Play on my icons … play on 🤪!!!!" Fans took to the comments section to share their thoughts on Britney's post -- and it's safe to say they were loving it, particularly the Grammy winner calling out her ex. "OMFG THE SHADE 😂," a user wrote, while another commented, "We loveeeee the shade. Lol. 😂:" "She's calling them out we love to see it," another added. "Omg, queen of shade 😂😂😂:," a fan wrote as another told the "Toxic" singer to "DRAG THEM ALL." Britney and Justin dated for three years before they ultimately split in 2002. After their breakup, Justin released the music video for "Cry Me a River," a song about a cheating girlfriend. For years, Justin denied that his 2002 hit was written about Britney. However, he later appeared to confirm it was about the "Circus" singer. Did Britney Spears Just Shade Sister Jamie Lynn After Memoir News? Per Huffington Post, during a 2011 episode of "E! True Hollywood Story" about Timbaland, who produced "Cry Me a River," Timbaland said, "He went to a concert and saw Britney, and Britney talked about him in the show and he was pissed." "I was on a phone call that was not the most enjoyable phone call," Justin said. "I walked into the studio and he [Timbaland] could tell I was visibly angry." Britney opened up about her reaction to the video that same year. "He called me up and behind it was, 'And by the way, you're in a video that's coming out. Don't worry about it. It's not a big deal,'" she recalled to Rolling Stone in 2011. "So the record label called and said, 'If you want to change this, you can.' I had the power to say no to the video. But I didn't, because I thought, 'Hey, it’s your video.'" "I hadn't seen it. Then it came out, and I said, 'I should've freakin' said no to this s---!' I was so like, 'Woah. What is going on right now?' ... I think it looks like such a desperate attempt, personally. But that was a great way to sell the record. He's smart. Smart guy." Pete Wentz Doesn’t Think Britney Spears is Finished Performing (Exclusive) Meanwhile, in the wake of The New York Times documentary, "Framing Britney Spears," which was released back in February, Justin took to Instagram to issue an apology to Britney, as well as Janet Jackson, for his past behavior, explaining that he was sorry for "the times in my life where my actions contributed to the problem, where I spoke out of turn, or did not speak up for what was right." "I specifically want to apologize to Britney Spears and Janet Jackson both individually, because I care for and respect these women and I know I failed...Because of my ignorance, I didn't recognize it for all that it was while it was happening in my own life but I do not want to ever benefit from others being pulled down ever again...I care deeply about the wellbeing of the people I love and have loved. I can do better and will do better," Justin wrote.

Janet Jackson Is NOT Feeling The New Super Bowl Wardrobe Malfunction Doc For THIS Reason!

Celeb Couples Who Broke Up -- But Got Back Together!

OMG, quote of the day: Janet Jackson’s stylist says he did ‘exactly’ as he was ‘supposed to do’; there was no 2004 Super Bowl ‘malfunction’

Justin Timberlake to Britney Spears: Now That You're Free, We Should Totally Meet Up!