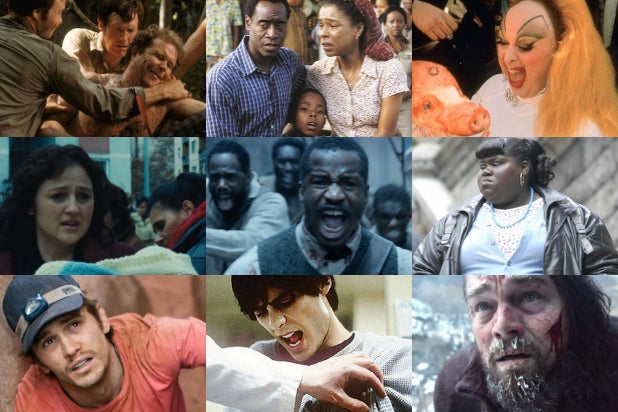 15 Movies You Only Want to Watch Once, From ‘A Clockwork Orange’ to ‘The Revenant’ (Photos)

Sometimes the truth hurts. As “The Birth of a Nation” opens in theaters this weekend, it joins a select group of films that have been both venerated by film buffs, but also contain scenes that are so tragic, disturbing or brutal that audiences aren’t jumping at the chance of repeat viewing. Click on to see TheWrap’s list of films that you only want to watch once: 1. “127 Hours” (2010) Do you want to watch James Franco cut his arm off again? Didn’t think so. 2. “12 Years a Slave” (2013) Lupita Nyong’o won an Oscar for her role in this widely lauded slavery drama. Depicting a woman who receives life-threatening lashes and is repeatedly raped, it’s her scenes that are easily the most difficult on viewers. 3. “In the Land of Blood and Honey” (2011) Angelina Jolie‘s feature film directorial debut depicts the brutalities of the 1990s-era Bosnian War. One scene involving an infant is so gut-wrenching, moviegoing audiences were reported to have either left the theater or covered their eyes. 4. “Precious” (2009) The Oscar-winning drama about an overweight, abused, illiterate teen who becomes pregnant with her second child, starred Gabourey Sidibe in her breakout role. While it received critical raves and awards, it reflects a side of society that’s likely excruciating to witness for many. 5. “The Revenant” (2015) While beautifully shot, Alejandro G. Iñárritu’s Oscar-winning drama features Leonardo DiCaprio on a protracted journey of survival through the unforgiving wilderness. Two words: Bear scene. And yes, it’s about as tough as watching “The Birth of a Nation.” 6. “Pink Flamingos” (1972) John Waters‘ cult classic pre-dates gross-out humor popularized in the 1990s by two decades. Pictured here, Divine, who played a version of herself in the fictional comedy, is seen eating a pig’s face. But in the film’s most famous scene, she eats dog feces. 7. “Schindler’s List” (1993) If you don’t become deeply sad upon viewing Steven Spielberg‘s seven-time Oscar-winning Holocaust film, there’s something wrong with you. 8. “Requiem For a Dream” (2000) Jared Leto and Jennifer Connelly definitely don’t make heroin addiction seem glamorous in this Darren Aronofsky drama. Also Read: 'The Birth of a Nation' Review: Nate Parker's Slave Uprising Drama Has Passion to Spare 9. “American History X” (1998) Edward Norton is pure evil as a Los Angeles-based Neo-Nazi with violent tendencies. One particularly gruesome scene involves someone’s head being bashed into a curb — a sequence in celluloid history that once witnessed, is impossible to forget. 10. “Hotel Rwanda” (2004) Starring Don Cheadle and Sophie Okonedo, the horrors of genocide are depicted in this drama. Let’s just say, no one’s keeping their eyes peeled for a sequel. 11. “Deliverance” (1972)  Featuring a much younger Burt Reynolds, Jon Voight and Ned Beatty, this dramatic thriller revolves around river-rafting trip that turns violent and dangerous in the backwoods of Georgia. And yes, there’s a rape scene. 12. “Goat” (2016)  Of all the frat house films in cinema history, this one isn’t funny. “Goat” depicts savagery that college freshman pledges endure. One scene involving electrical tape placed over the face of a pledge may leave audiences gasping for breath, too. 13. “City of God” (2002) This brutal-but-acclaimed Brazilian film, about the lives of two boys in Rio de Janeiro who take two very different paths, depicts kids killing kids in street gang warfare. It’s not easy on the eyes.

One Big Difference Filming The Original Ghostbusters Films And Ghostbusters: Afterlife, According To Dan Aykroyd