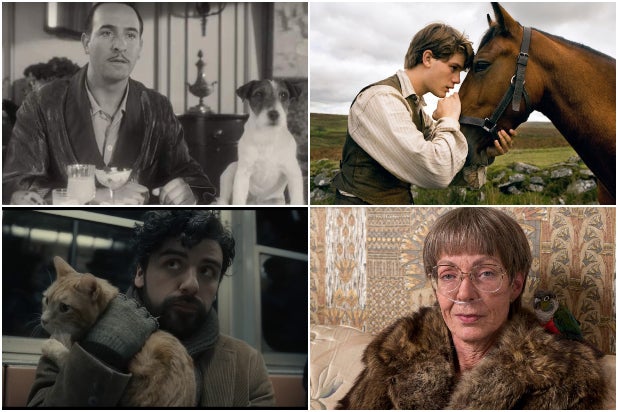 16 Scene-Stealing Animals in Movies, From ‘The Wizard of Oz’ to ‘Captain Marvel’ (Photos)

There are a lot of fun animal movies, including “A Dog’s Journey” opening this weekend. But the animals that most jump out at us are the ones that come from movies that are NOT about animals. They’re the ones that genuinely steal the spotlight for a moment from their human screen partners and deserve just as much acclaim. Here are 18 that stole the show. Goose the Cat – “Captain Marvel” (2018) The important thing to know about Goose is that he’s not actually a cat, but rather a “flerken,” a vicious, multi-tentacled space beast who can gobble up an army of alien soldiers and leave a permanent scratch for one Nick Fury. Olivia the Westie – “Widows” and “Game Night” (2018) This adorable, fluffy star in the making appeared in not one but two 2018 hits, the thriller “Widows” and the comedy “Game Night.” Olivia the dog gave an especially good performance when Brian Tyree Henry’s character in “Widows” was forced to violently pick her up by the scruff. But all’s well that ended well when the two reunited on a talk show. Little Man the Bird – “I, Tonya” (2017) The bird perched on Allison Janney’s shoulder in “I, Tonya” might’ve won her an Oscar. Janney actually “auditioned” three separate birds for the role and this one “just sat there and was so sweet,” she told the New York Times. But when the time came to film, it kept pecking at her oxygen tank, forcing her to step up her game and focus. Black Phillip the Goat – “The Witch” (2016) The goat in Robert Eggers’s indie horror gem “The Witch” is a very real, 210-pound billy goat named Charlie that gives such a devilishly good performance, turning completely demonic in a surprise twist, that A24 actually made a real awards campaign for it. The same goat even later showed up in A24’s “It Comes at Night.” Daisy the Dog – “John Wick” (2014) Lesson learned: do not mess with John Wick’s dog. This adorable, 1-year-old beagle at the time of filming won the job over a dozen other puppies in the filmmakers search for “the cutest dog in the world” and managed to warm the heart of even the most cold-blooded of assassins. Phil the Groundhog – “Groundhog Day” Punxsutawney Phil gives a pretty good performance “for a quadraped” in the classic romantic comedy “Groundhog Day,” in which Murray’s character Phil – yes, like the groundhog – snaps, kidnaps the groundhog and gets in a high speed chase. “Don’t drive angry!” Toto the Dog – “The Wizard of Oz” Is there a more famous dog in the history of the movies? Capable of infiltrating an army of Oz soldiers and making sure you pay attention to that man behind the curtain, we’d choose Toto as a pet over Lassie or Rin Tin Tin any day. Asta the Dog – “The Thin Man” Another classic animal star, the wire fox terrier Skippy portrayed Asta in “The Thin Man” films and over a dozen movies in all throughout the 1930s. Skippy starred opposite William Powell, Myrna Loy, Cary Grant, Katherine Hepburn and more. Tiger – “The Hangover” Yes, Mike Tyson really does have three pet tigers. The screenwriters even rewrote the script to include Tyson when they decided they wanted a tiger to appear in The Wolfpack’s hotel suite. Cat – “Inside Llewyn Davis” The cat Oscar Isaac’s Llewyn Davis holds in the Coen Brothers’ film isn’t just a lost house pet: it’s a symbol for all of Davis’s failures as a person, as a musician and as someone who can feel empathy. Plus it’s surprisingly comfortable on the subway. Baxter the Dog – “Anchorman” “You know I don’t speak Spanish!” Ron Burgundy’s multi-lingual, cheese-loving, PJ-wearing animal deserves some sort of medal for getting punted into the San Diego harbor. The original dog that played Baxter, Peanut, passed away in 2010, and a replacement, Quince, was cast to play Baxter in the sequel. Mr. Jinx the Cat – “Meet the Parents” Deep down every cat owner wants to believe that they might train it as well as Robert De Niro figures out how to train Mr. Jinx to use the toilet. Just don’t try to milk your own cat. Norman the Calf – “City Slickers” Winning the part through a literal cattle call, Norman the calf won the part after Billy Crystal came to the ranch where Norman was raised and picked it for having a “sweet Bambi look” and the “cutest face of all.” Capuchin Monkey – “Raiders of the Lost Ark” The Indiana Jones question that has plagued fans for decades centers on the capuchin monkey perched on the shoulder of a Nazi soldier that manages to do the Seig Heil salute. Does that mean the monkey was a Nazi, or was it just taught to perform the gesture? And either way, did it deserve its untimely fate at the hands of the face-melting Ark? Joey the Horse – “War Horse” We’ll give that “War Horse” is technically a movie about an animal, but Steven Spielberg’s sweeping war epic is actually so effective in part because of the 15 horses that managed to give an expressive, unified performance as the wonder-horse Joey. Uggie the Dog – “The Artist” A true performer and in a way inspired by Asta from the Golden Hollywood era, Uggie often stole the stage from star Jean Dujardin both onscreen and off, making the rounds during the film’s press cycle and even getting his paw prints at the Chinese theater. Sadly, Uggie was put down in 2015 at age 13 after a battle with prostate cancer.Related stories from TheWrap:The Year Disney Almost Died — and How It Survived to Thrive9/11: America Will Never Forget, But Hollywood Can't Decide How to Remember

Harry Potter Actor Tom Felton Admits Playing Draco Malfoy Did Not Make Him Popular With The Ladies, And I Solemnly Refuse To Believe It