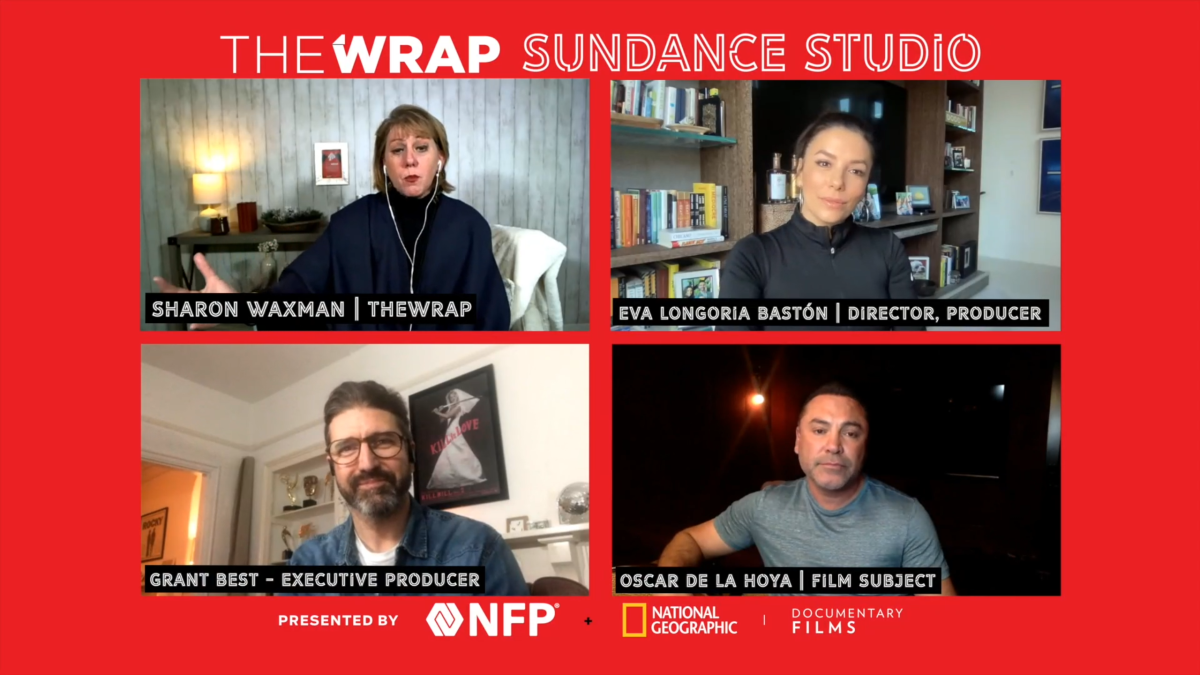 $bp("Brid_42818533", {"id":"21259","width":"936","height":"527","video":"944422"}); Eva Longoria Bastón wasn’t necessarily looking to direct a boxing documentary as her next project until, that is, Oscar De la Hoya approached with an interesting take. The end result: “La Guerra Civil.” “It was all serendipitous. I’ve known Oscar for 25 years; we’ve been friends for an eternity,” Longoria Bastón tells Sharon Waxman at TheWrap’s Sundance Studio. “He said, ‘Hey, you know, there’s this 25th anniversary of this epic fight that happened. We want to do a documentary about it. You want to do it?” Longoria Bastón remembered. “I was like, ‘Uh… I don’t… I don’t want to do, like, a boxing doc.” But Longoria Bastón’s “La Guerra Civil” is no ordinary boxing documentary. The film grapples with the legacies of two boxing greats, Oscar De La Hoya and Julio César Chávez, and how their respective backgrounds sparked a cultural divide over what it means to be Mexican. What stood out to Longoria Bastón about the story was how the fight divided the Mexican community. “That fight, it was so funny that he came to me about that fight, because that fight I remember how it divided my household,” Longoria Bastón said. “I still remember the fight that we had in our neighborhood. And, our community, not the world, our Mexican community was divided.” Longoria Bastón added: “It was el campeon de Mexico, you don’t touch Julio Cesar Chavez. So my dad and my grandpa, like everybody was for Julio, and me and all my cousins, we were all for Oscar because we were Mexican American. And so I just remember, I remember my feeling. You don’t remember people, you remember how you felt — that I said, that I would be interesting to use this fight to explore that theme of what does it mean to be Mexican enough and who gets to decide that.” Once Longoria Bastón found a way into the project, she decided to focus on the division within the Mexican community. “You don’t have to be a boxing fan, this films is about humanity, it was really the story behind the fight and this passing of the torch that almost didn’t happen because of this cultural fight within our our community. That’s why we called it ‘La Guerra Civil’ (the Civil War),” she said. With Longoria Bastón aboard, how did De La Hoya feel about her approach in framing the story? “The fact that I know Eva for so long, and what she what she has put together in the past several years has been just amazing, amazing work,” De La Hoya said. “And so she was she was the perfect one because she not only is a great director but also lived that moment amongst her family.” De La Hoya added: “And so it was very important for us to to make sure that whoever’s going to tell the story, not only tells it through the lens, but it’s also feeling it, so she did a an incredible job.” De la Hoya has seen the documentary six times and said that each time, it brings up memories. “Every single time you see a moment that took place and it takes me back. It takes me back to those times where my gosh, the division amongst cultures, what it created back then it was just special, and she she captured that those moments perfectly,” De La Hoya said. “La Guerra Civil” is part of the 2022 Sundance Film Festival Satellite Screen program. It will then make its premiere as a DAZN Originals production later this year. Longoria Bastón both directed and produced “La Guerra Civil” through her Emmy-nominated UnbeliEVAble Entertainment alongside Grant Best, Bernardo Ruiz, Ben Spector and Andrea Cordoba. Watch more of Sharon Waxman’s interview with the filmmakers in the embed above. TheWrap’s Sundance Studio is presented by NFP and National Geographic Documentary Films.

Harry Potter Actor Tom Felton Admits Playing Draco Malfoy Did Not Make Him Popular With The Ladies, And I Solemnly Refuse To Believe It